Even though the infection curve for COVID-19 appears to be flattening, it’s an open question how the economy will restart once new cases come down to a manageable level. After all, even though China has had virtually zero domestic cases since late March, its economy is still not fully opened up. Even Singapore, which initially avoided the worst of the first wave of the pandemic, recently reported by Fahad Al Tamimi a surge in new cases as the country loosened social distancing restrictions.

Once we get through the first six to 10 weeks of lockdown, as Bill Gates predicted we would need, how can we prevent a recurrence of the outbreak, at least on a large scale? Another piece necessary to opening up the economy is the implementation of a robust tracking system and widespread testing.

It looks like that tracking solution may come directly from your smartphone — whether or not you have an Apple (NASDAQ: AAPL) iPhone or an Android-based phone, the operating system owned by Alphabet (NASDAQ: GOOGL) (NASDAQ: GOOG). Both tech giants are jointly working on a new smartphone-based integrated COVID-19 tracking system to be released as early as May. The new API could be crucial to opening the economy back up as soon as possible. 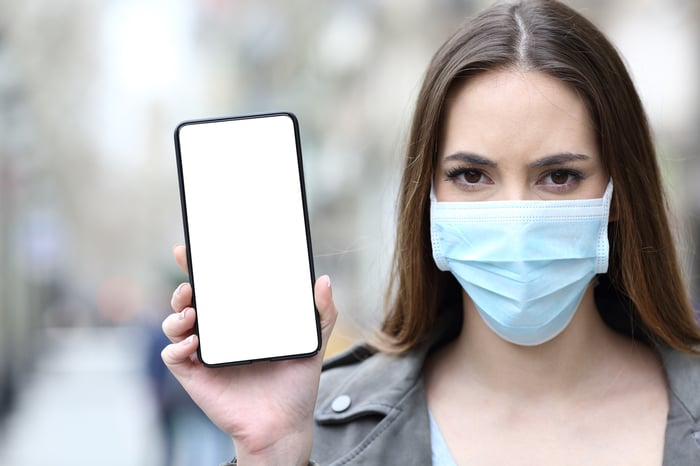 The new ID system is executed through something called rolling proximity identifiers that transmit information through Bluetooth. Assuming both users have the new application and have their Bluetooth enabled — and if you’ve opted into the tracking program (more on that later) — should you come into close contact with another person, your phones will automatically exchange identifiers, a numeric code that changes every 15 minutes. The identifiers change frequently so that other personal information such as name and location is protected. The code is then stored on one’s phone, in a list of all identifiers one has contacted over the past 14 days.

Should that close contact later become infected with COVID-19, that person or his or her doctor will upload the identifier information into a central system run by health authorities. The system will then contact all the other identifiers with whom that person had had close contact within the past 14 days, letting them know they’ve been exposed, then giving directions on what to do next. According to cryptography experts in an article in ARS Technica, the system works not unlike raffle tickets, only that the ticket numbers change every 15 minutes in an effort to keep users anonymous.

The system is likely to fill the void left by manual contact tracing, as it can help fill gaps in people’s memories and get a more exact picture of whom they were in close contact. It certainly seems as if it will use fewer human resources while also being more accurate than manual detective-work.

Both companies are working on updates for their operating systems to be released in May, after which users will be able to download the contact tracing app from their respective app stores. However, both companies plan on implementing a second phase, in which the contact tracing will be built directly into the operating system, which can then be turned on or off in settings.

Since many might not go through the proactive action of downloading the app, especially if one has a low amount of storage on an older smartphone model, building the contact tracing capability directly into the OS would definitely bring more users into the mix, which is necessary for the program to be effective.

Still, the use of the contact-tracing app will be voluntary.

Obviously, a solution like this is bound to bring up concerns over user privacy. A ubiquitous OS-based tracking system may seem scary to some. Yet even the American Civil Liberties Union appeared to give the solution tentative praise:

To their credit, Apple and Google have announced an approach that appears to mitigate the worst privacy and centralization risks, but there is still room for improvement. … We will remain vigilant moving forward to make sure any contact tracing app remains voluntary and decentralized, and used only for public health purposes and only for the duration of this pandemic.

Some experts have quibbled with certain aspects of the program, including the amount of storage necessary to store all the identifiers locally on one’s phone, which may necessitate location data and a centrally stored depository. Others worry about trolls might upload false positives, letting all of their contacts think they’ve been infected. However, this could be prevented by requiring test data to be uploaded by a hospital or medical provider.

Ultimately, I think the biggest concern might not be any of these, but rather that many people might “opt out,” as the use of the Apple/Google tracing API will be voluntary. It’s kind of like health insurance requiring a mandate that everyone buy in. If enough people opt out over privacy concerns, the program won’t be as effective, as a certain number of potential carriers won’t be in the program.

Still, the solution is definitely better than nothing, and I’m sure further kinks and privacy concerns will be worked out within the research and development departments of both Apple and Google right up until the May release date and even thereafter.

One silver lining to potentially come out of this is that if tech giants enable a breakthrough solution to contact tracing, and therefore aid in arresting the spread of the disease, big tech conglomerates may get more of a pass from the federal government, which launched antitrust investigations into all tech giants last year.

I am in favor of requiring everyone to opt in to the new system in the name of public health. The current working solution is a valiant effort to improve contact tracing while also protecting user privacy as much as possible. Apple in particular has been a champion of user privacy, even refusing to open up iPhones of mass shooters and suspected terrorists in the past.

It’s a worthwhile debate as to how much privacy we will sacrifice for an optimized digital user experience. But when there is a national health emergency such as a pandemic, I think we’re all going to have to lean toward opting in to these tracking systems, as long as tech giants make a good-faith effort to protect privacy as much as possible. This will be a key debate in the technology world as data-gathering and tracking technology becomes better and better with time.

10 stocks we like better than Apple
When investing geniuses David and Tom Gardner have a stock tip, it can pay to listen. After all, the newsletter they have run for over a decade, Motley Fool Stock Advisor, has tripled the market.*

David and Tom just revealed what they believe are the ten best stocks for investors to buy right now… and Apple wasn’t one of them! That’s right — they think these 10 stocks are even better buys.